Human relationships are complicated. Sometimes it is necessary to adopt certain strategies in order to attract the attention of a boy.

Perhaps you have been in a relationship for a long time and are going through a bad patch – he is distant and you seem to no longer interest him. He’s walking away and you don’t know how to handle the situation.

Perhaps you have been in a relationship for a short time and you do not want to spoil everything by being too sticky. You want everything to go well, but even if it is a little early to say anything, you have the impression that it is moving away.

Take a deep breath and be patient.

Most women would overreact. They would multiply stupid actions, so as to attract the attention of the boy in question. But you won’t do anything like that because I’m going to tell you how to get his attention even if at the moment you feel like it’s a lost cause.

In such situations, to stop the “syndrome” of removal, you just need to use this secret remedy called Ignorance.

Although it sounds simple and relatively obvious, believe me — when it comes to feelings, it’s hard to control yourself. You may even find yourself doing things that you vowed never to do.

If you were told the story of a girl, sending messages to a boy when he didn’t answer him (or something like that), you would probably say, “I would never do that.” She’s crazy! If I were in the same situation, I would ignore it completely. But there you are, doing exactly the same thing – when you promised yourself you would never do it. TO IGNORE it seems so difficult.

The strategy of “ignorance” has to be implemented in a certain way. Start with yourself and then gradually think about what you want from it.

Here are some tips so that the “IGNORANCE” mission is more likely to succeed and that you attract his attention:

1. Ignore the need to unpack your feelings.

Here is a trap in which many women fall. They think that men have the same way of experiencing feelings as they do. Then they express their feelings far too early.

Men can be afraid. They usually take longer to understand and therefore express their feelings. If you show your feelings too brutally or too exaggerated, this may explain why it is taking a different direction.

Take it easy. Put yourself at his pace and express your feelings only when he is ready to express his own.

Make sure you are at the same level. By expressing your love and attachment too early, they may perceive signals of hopelessness or insecurity.

By giving him space and time to think, you may be opening the way to mutual love.

He will probably wonder why you changed and why you are paying less attention to him, and that will make him come to you.

2. Ignore your need to overreact.

Most women tend to draw hasty conclusions. Maybe everything is fine, but you imagine the opposite simply because he does not respond immediately to your messages or because he did not put a “heart” emoji after wishing you a good night .

Constantly complaining and getting upset at the slightest detail can make him want to run away from him! No one likes to spend their time listening to whining, especially for no reason.

If there is a real problem you want to talk to him about, make sure it really is. If he has hurt you in any way, you need to talk to him openly. However, the tendency to exaggerate can quickly stifle a relationship.

You want him to see you as a woman who does not over-analyze each of his words. You have a lifetime to live and you can’t spend it being obsessed with every little thing it does. You only solve significant problems.

He might even be surprised not to see you react about things that would normally take you out of your hinges.

4. Stop ignoring yourself and it will stop too.

Think of yourself first. Don’t be too attentive to their needs — don’t jump on the phone as soon as they call you or on every last-minute invitation they send you. You don’t have to pretend to be busy. You need to be really busy. Occupied by yourself.

Make your life go the way you want. Pay attention to your needs. You have your studies, your friends, your family, your job, your ambitions, your hobbies, and other interests unrelated to it.

You must have your own life and it must obviously be an important part of it. It should be one that fits your schedule — at least once in a while.

You don’t have to constantly bend over backwards to adapt to his projects. Compromise is always a good thing, but don’t let it seem like you have no life of your own.

A man loves nothing more than an independent woman, who is able to find a place for him in his busy schedule.

Take matters into your own hands. Plan car trips. Plan dinners. Plan whatever is likely to appeal to both of you. Let him know that you have organized an activity and that you would like him to join you.

Many women are used to men planning everything. It is then a way to demonstrate your independence, your ability to organize activities and your desire for him to join you.

At that point, what is extremely important to say is, “If you can’t come, it doesn’t matter. I will ask a friend to accompany me because I really want to go. This will force him to ask himself, “What friend? You will also show him your ability to have fun without him.

It’s actually a subtle way to ignore it.

If they ignore your messages, don’t ask them why. Do the same thing – don’t write to her anymore. Don’t call him. Do not insist. Don’t force things.

It is a bad idea to invest in someone who does not in turn invest in us. That’s why you shouldn’t give it more than it gives you. You must love yourself in the same way and give each other the same amount of time and attention.

Obviously, you are not going to measure and record who gives what and on what occasion, but make sure that, overall, you are on the same wavelength.

If you feel like you are giving too much when he is giving you nothing, you will have to ask yourself if this is really the kind of relationship you want.

The bottom line is that men are relatively “simple”: if you run after them, they will move away. If you give them their change, they will run after you! 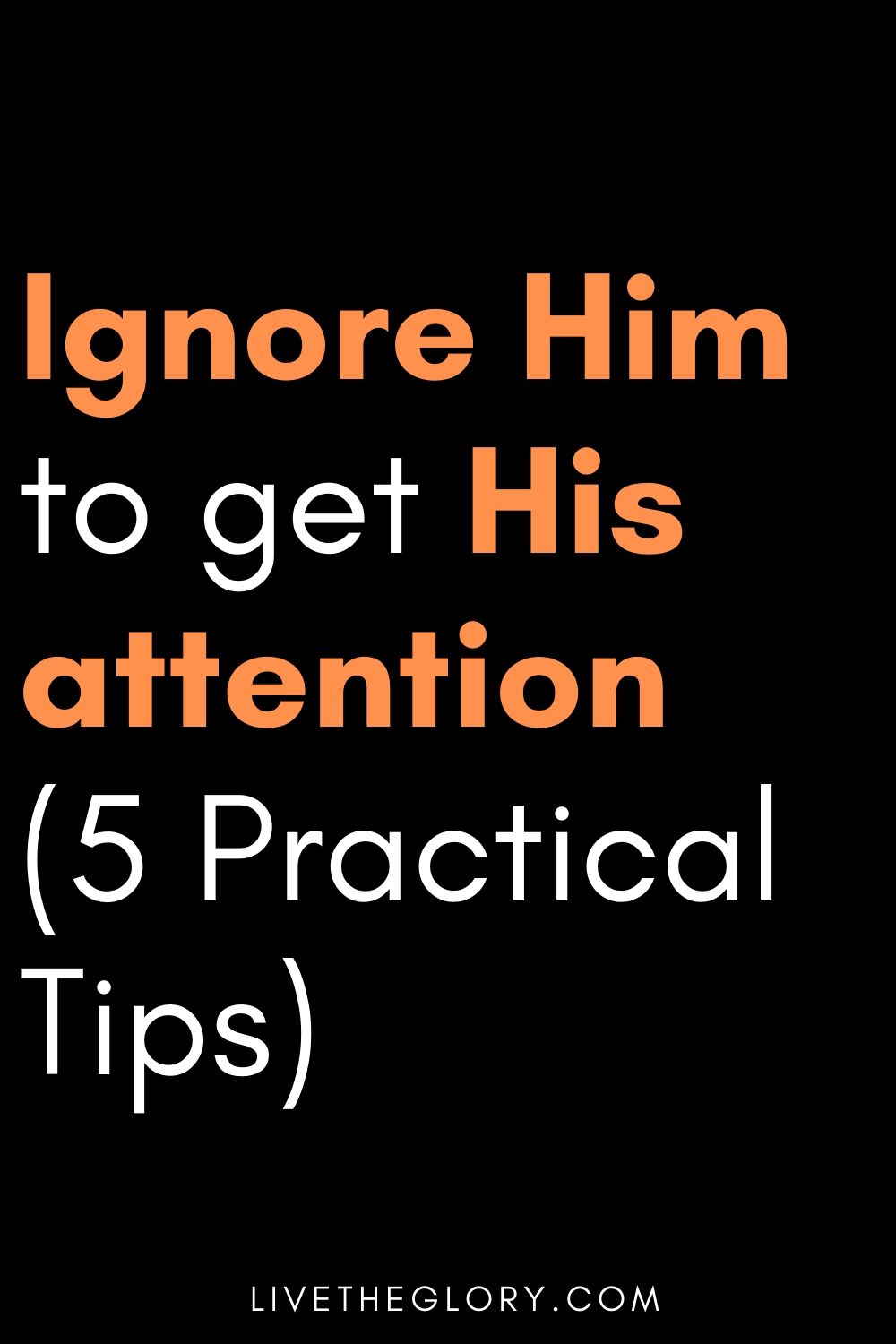