Create a post
by mybesttricks 3 years ago3 years ago
Fall in love again and return with your ex … Good or bad idea? This is the question that was asked to four women who tried the experiment.
Getting back with you ex, the idea may seem tempting. So tempting that 37% of couples decide to give themselves a chance after a first breakup . Success is not always there since only 12% of them manage to rebuild despite their liabilities. But since in matters of romantic relationships, the statistics are only statistics, four women tell us about their experience in the field.

Charlotte, 34 years old: “If I had to do it again I would not relaunch myself in such a relationship”

I met my ex in college, I was 15 at the time. We stayed together for a total of 7 years. A relationship punctuated by several ruptures including one of a year when I was 19 years old. I used to like to say that it was a joint decision, but I admit today that I have largely suffered the situation.

He came back to me calling me one evening after a year without almost speaking. We spent three hours on the phone talking about our lives, about us. We met unofficially – it was a will on his part – for about two months before we really got back together. The goodwill and happiness of the love found quickly gave way to new disputes . Things had not progressed since we were arguing for exactly the same reasons as before. We had separated because of his sickly jealousy and his many deceptions .

His true personality returned after about 4 months, he started to blow hot and cold again, not responding to certain messages for several days and I again surprised messages that showed me that nothing really had happened. changed … Back then to square one.

We separated definitively a year and a half later. It was very hard, beyond the emotional aspect – I was very in love – I had the feeling of having lost two years of my life, of having stagnated. Even today, looking back, I feel like I have wasted two years of my life trying to save something that was doomed to fail.

We have no contact today. I don’t hold a grudge, but if I had to do it again I would not revive myself in such a relationship. I was at the end of our story, to the point of being disgusted with it and no longer respecting myself. Before getting back together with his ex, I think we have to make sure that we are on the same wavelength, that everyone has become aware of their mistakes. I think that we should not confuse either the attraction that one can have for his ex – sleeping with his ex is a fairly common fantasy – with the feelings that one can have. Diving back into an old relationship is pleasant: at the beginning it’s comfortable, we go back into a routine reassuring, we remember memories, pleasant personality traits. But once this short moment has passed, if nothing has really changed, we remember why it didn’t work.

We met very young, at 19 years old. Our relationship started on the wheel and despite our young age, we talked about future plans together. We would end our lives together, it was obvious for both of us. Except that after a year and a half of relationship, things got complicated. We were both very immature and resolving conflicts was clearly not our strong point. My ex ended up cheating on me and we separated.

I was beside myself, but above all very sad, devastated. But I have rebuilt myself over the months. I had cut ties with my ex, who I still thought of despite his deception. She ended up reconnecting after a few months and, thread by needle, the relationship started again. We moved in together and are talking about future plans again. But after two years of living together with ups and downs, I felt suffocated.

No matter how much I loved her, I had the feeling that I no longer knew who I was apart from her and I needed distance. I did not really understand why, at that time, I felt a vital need to move away. I moved and we definitely separated.

At the time of the breakup, I realized that I had never managed to give her my trust again. I saw that she was mad at herself, that she had changed and probably wouldn’t have done it again, but I just couldn’t do it. I think that played a big part in our breakup. I do not, however, regret the chance that we have given ourselves back, because today I feel that I have had a real end to our history. But in my opinion, for this to work, you have to be sure you can forget the past. At the risk of seeing resentment and sadness return more years later. What I personally did not manage to do, despite a lot of will.

We had broken up after a year and a half of relationship, because of a “slight” deception on his side. We stayed apart for a year and a half. We really got back in touch with the death of a close friend of his. I was the only person he wanted to confide in and we got back to it, little by little.

At the beginning, it was not necessarily simple because we systematically had the same problems as at the beginning of our relationship which returned. But over time, maturity also on both sides, we managed to overcome all that.

Today, we have been together for more than ten years and we just got married in August. I think before give a chance with her ex, one must be sure enough · e self because, especially if the break was caused by a deception, it is very difficult to succeed to trust again. You have to be aware that when you get back with your ex, it will be several months or even several complicated years before the relationship is really good, because of the liabilities that you already have. But if you are sure of yourself, in my opinion you should not hesitate to give yourself a chance, taking care not to repeat the mistakes of the past.

Alex was my first love and I was his. He left me after a year and a half of long distance relationship , I was studying in Nice and he was from Nancy. We met when he was on vacation in my area and we tried a relationship despite the distance. But it was not ultimately she who separated us because it was when I was doing my internship near Metz that questions arose.

Alex had never had a girlfriend before me, I had already had experiences. Despite all our feelings, I told myself that it was likely to stop because of this question of “living” and building one without the other. He made the decision to end our journey together before I did. I was devastated. Zero new for almost 4 years. I learned that he had finally partnered with a classmate quite quickly after me.

Social networks oblige, via interposed friends, I discover 4 years later that he finishes his studies on a sabbatical year between Australia and South America … A year after his departure approximately, someone rings at my door, in Paris. It was him. 5 years later, my first love was on my doorstep in Paris … The shock. He asks me if I want to let him in. He quickly tells me about his trip but I want to get to the facts: what is he doing there? Does his girlfriend know it?

He explains to me that his trip had made him understand that he did not love him, that he would never love someone like me … In short, a real romantic comedy . Me, for my part, I had never really turned the page either. We end up spending the night together. It’s magic. But I tell him that I want to go slowly, that we don’t really know each other anymore. We meet again little by little. It was what I had always dreamed of. A real happy end …

Except that at almost 25, I was in my working life, he was still a student. And little by little, I started to find him very often immature. After 4 or 5 months of relationship I made myself a reason and him too: it could not stick again. Despite everything, I do not regret having tried again. This allowed us not to cling to a chimera. I sincerely think that time can erase certain difficulties, when they are linked to moments of life. In my opinion, if we decide to give ourselves a chance, we must do it as if it were a new story and start all over again. And this in the hope of giving yourself a real chance to succeed, this time. 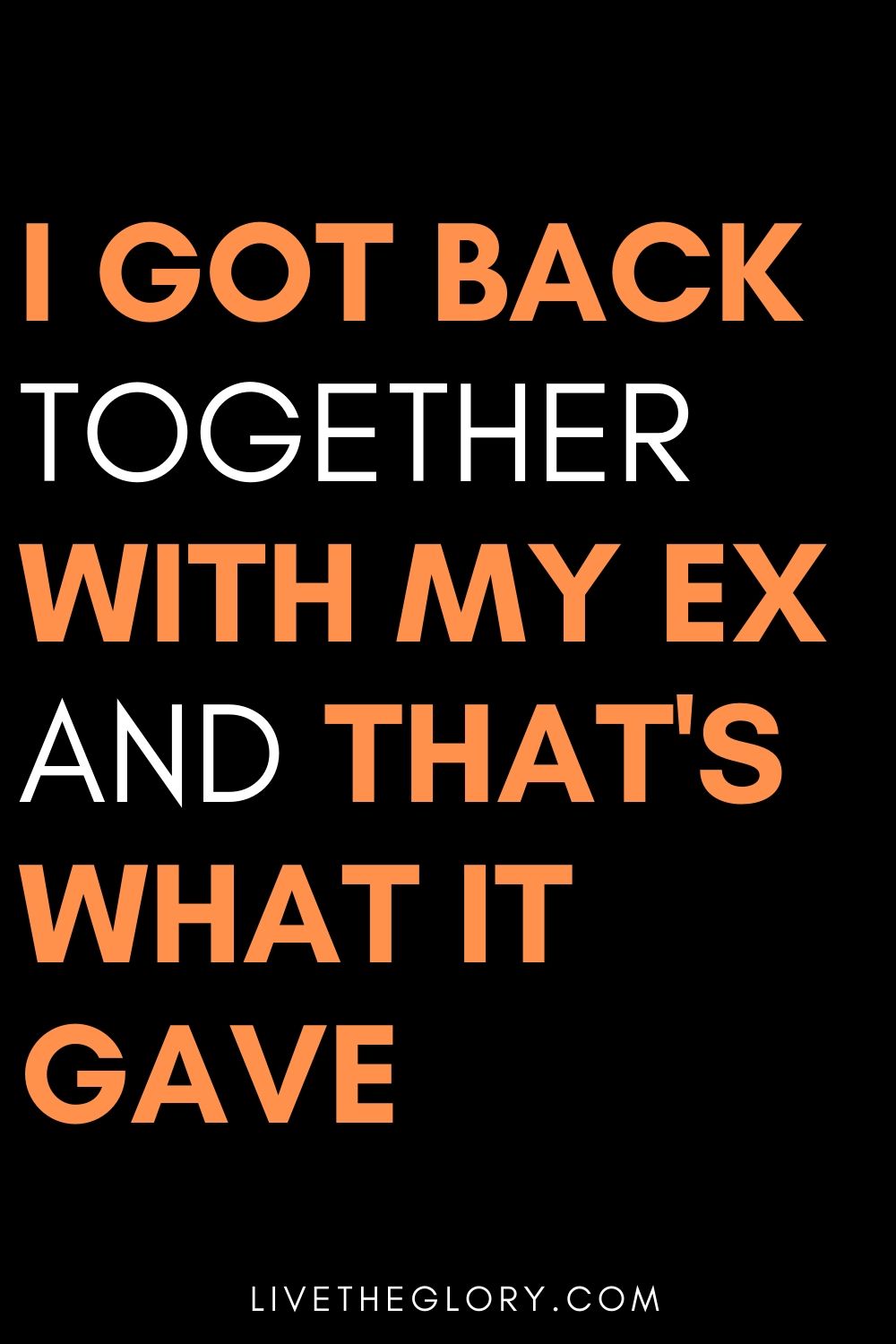