Men are generally considered to be the least talkative, which is not so true.

Women have a variety of things to say and do both when they are with someone and when they are not, their body language and eye movements can bring a dead person back to life or petrify a man in his boots.

The men are quite frank in their words, but is that really the case? Do they really mean what they say or is there a lot more behind their simple words?

Men have a lot to say, but often people miss the signal or are unable to translate it as expected.

Here are some phrases that men say when they are in love with you:

If he says he noticed that you are doing, eating, wearing, talking to, or any other action… know that he is really attentive to you and not because he wants to be your best friend, but because he is really interested in you.

Men like to feel important or useful. They are usually helpful and if he offers help, he may be attracted to you. Men are helpful, but they don’t offer their services to just any woman, men only do things for women they really like or sometimes for “profit”. If he offers you help as if he were the most compassionate guy in the world, hey my daughter, it is because he is fully on you.

When men are interested in you, they are not too direct, just to avoid being hurt. So you won’t find one who says he was thinking of you. He will say that something made him think of you, and it is obvious that he thought of you and that he wants you to know it without him really telling you.

If he asks you where you are and why, he really loves you! Unless he doesn’t do it all the time. He doesn’t want to harass you or intrude on your privacy, he’s really in love with you. He takes care of you and often asks you just to start the conversation with you.

Don’t over-analyze this. He likes you and he really means it. He finds you really great and it was a sincere compliment, take it . Remember, he won’t tell you every day, because he doesn’t want it to be too obvious that he’s in love with you, but every time he says it, he thinks it.

This sentence is a real cliché, but you will know it when you hear it. When a man takes a serious interest in you, he tells you, for example, “You can talk to me if you want”, “Nice to listen to you”, “I’ll be there if you want”, and so on. He wants to be part of your life and will not let you walk alone on this dark path. He is fully on you!

Unless you are very sensitive or romantic, you will not hear a man say that. If he says he misses you, you’ve really made room for him. Be careful, if he says that to make all the other girls turn pale, chances are that he wants “something” from you, which is not what we are trying to do but if a man confesses to you that he misses you, he loves you deeply.

Men do not really open up to their problems, stress or frustration, in fact, they express nothing but happiness or “it’s okay” because they do not want to show their vulnerability. If he readily admits other emotions, then he trusts you and is attracted enough to show you his weaknesses and concerns.

Boys don’t really like to talk about their families and even less about their mothers, unless they are ready to show you their vulnerability. If he says that he was talking to his mother and that he shares what they were doing, then you really mean a lot to him and he is fully on you.

10. He gives you nicknames 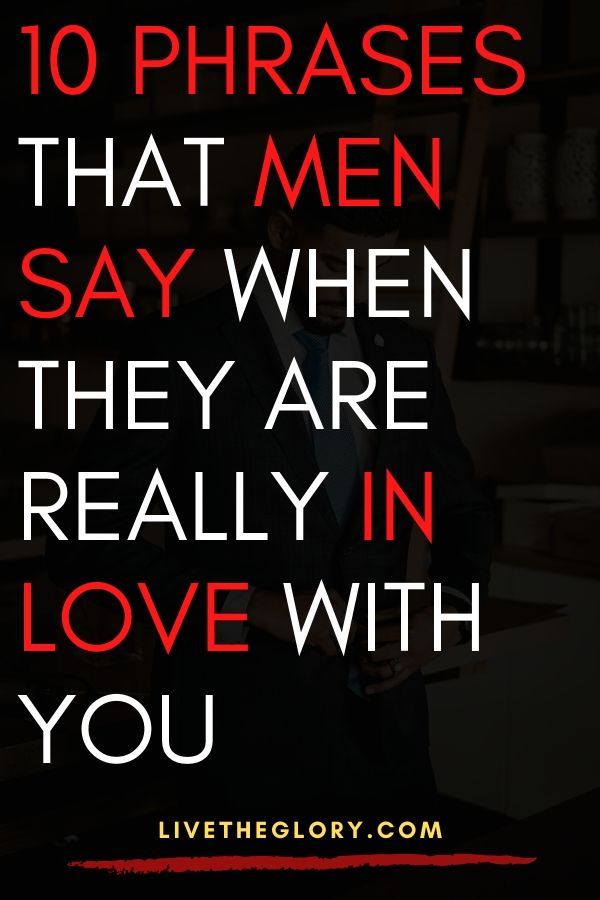